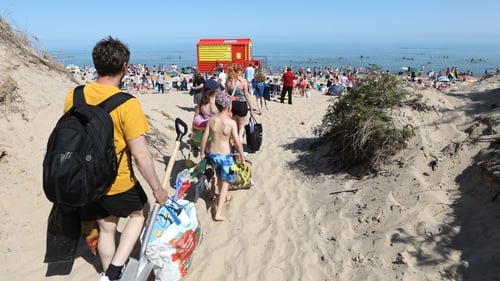 The Environmental Protection Agency has found that the quality of Ireland’s bathing water continued to improve in 2021.

The agency said that 97% of designated bathing waters met or exceeded the minimum standard.

Of 148 beaches monitored around the country, the EPA said 78% were deemed excellent, 13% good, 7% sufficient, and just two beaches failed and were classed as poor.

The EPA is encouraging swimmers to ask their Local Authorities to officially identify additional local bathing sites to ensure they are managed and monitored to protect bathers’ health. 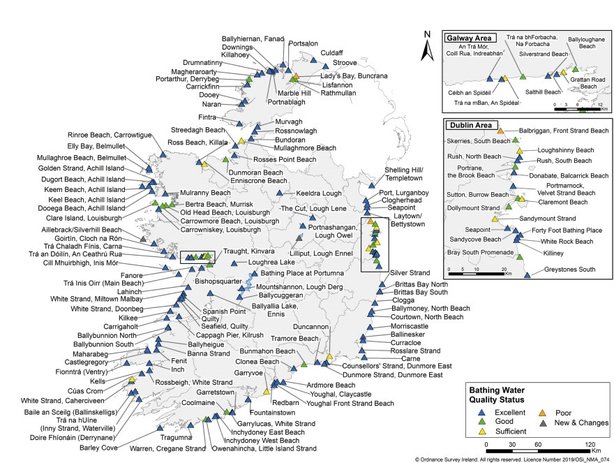 Bathing Water Quality map of Ireland (Source:EPA/Ordnance Survey Ireland)
A total of 115 bathing locations have excellent water quality according to the EPA report, four more than last year, while the number classed as poor went down by two.

The EPA noted, however, that although bathing water quality has continued to improve overall, there are still issues which need to be addressed, to protect and further improve bathing waters.

Agriculture, urban wastewater and fouling from dogs on beaches still impact the quality of bathing waters.

In addition, heavy rainfall can also quickly impact by washing pollution into our bathing waters.

It said that swimmers should always check beaches.ie for the latest water quality information for their local bathing site.

The report highlights significant improvements in bathing water quality at Lilliput on Lough Ennell in Co Westmeath, which had been designated as poor quality for the previous three years.

It says that actions taken by farmers in the surrounding area over the past two years have rescued the situation at Lilliput. This was driven by evidence and science generated by Westmeath County Council, the Local Authority Waters Programme and the Agricultural Sustainability, Support and Advisory Programme all working together. As a result of these improvements, the restriction on swimming which had been in place there has been removed.

Dr Eimear Cotter, Director of the EPA’s Office of Evidence and Assessment, said: “the EPA recognises that swimming is increasingly becoming a year-round activity and encourages the provision of information that will help winter swimmers to make informed choices to protect their health.

“The findings and outcome of the multi-stakeholder National Bathing Water Expert Group, due later this year, will provide important information in this regard and help identify potential options to better protect bathers who swim year-round.”

Two bathing waters were identified in 2020 and were classified for the first time following the 2021 season.

They were Carrigaholt and Quilty, both in Co Clare and both have been deemed excellent in this latest report.

In addition 42 pollution incidents were reported to EPA during 2021. Incidents have the potential to cause a pollution risk and, when they occur, swimming restrictions are applied at the beach until sampling shows the water quality is safe.

Local authorities also put up 104 ‘Prior Warning’ notices at beaches last year to warn swimmers that short-term pollution (lasting no more than a few days) may occur due to heavy rainfall.

These warnings are removed when sampling shows the water quality is safe.