Ukrainian forces destroyed a pontoon bridge and parts of Russian armoured column as it tried to cross a river in the Donbas region, video footage released by Ukraine’s military showed today, and a Russian naval ship was set afire in the Black Sea.

Ukraine has driven Russian troops back from the second-largest city of Kharkiv in the fastest advance since Kremlin forces pulled away from Kyiv and the northeast over a month ago.

Reuters journalists have confirmed Ukraine is now in control of territory stretching to the banks of the Siverskyi Donets River, around 40km east of Kharkiv. The city, which had been under fierce bombardment, has been quiet for at least two weeks but fighting continued to the north. 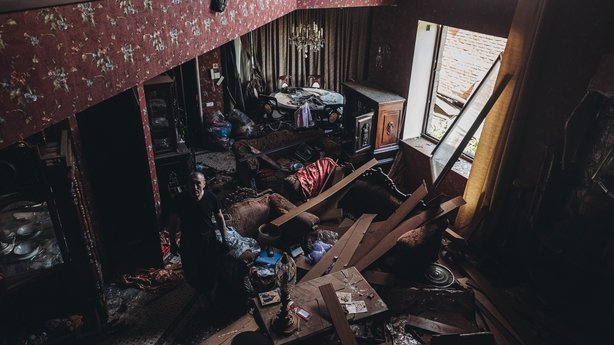 A man collects items from his house destroyed by Russian attacks in Kharkiv yesterday
Firefighters doused the smouldering wreckage of the House of Culture in Dergachi, 10km north of Kharkiv, today after what local officials said was a pre-dawn Russian missile attack on the building used to distribute aid. Volunteers inside were trying to salvage packages of baby diapers and formula.

“I can’t call it anything but a terrorist act,” the mayor, Vyacheslav Zadorenko, told Reuters. “They wanted to hit the base where we store provisions and create a humanitarian catastrophe.”

Another missile had slammed into the building yesterday and Russian shelling had wounded a staff member at a clinic and killed a young couple in their home, he said.

Southeast of Kharkiv, Britain said Ukraine had stopped Russian forces crossing the Siverskyi Donets river west of Severodonetsk. Footage released by Ukrainian Airborne Forces Command appeared to show several burnt out military vehicles and segments of a bridge partially submerged in the river and many other damaged or abandoned vehicles, including tanks, nearby.

Reuters could not immediately verify the report, or when or where the clash took place.

The British defence ministry said Russia was investing significant military effort near Severodonetsk and Izium, and trying to break through towards Sloviansk and Kramatorsk to complete their takeover of Ukraine’s industrial Donbas region. 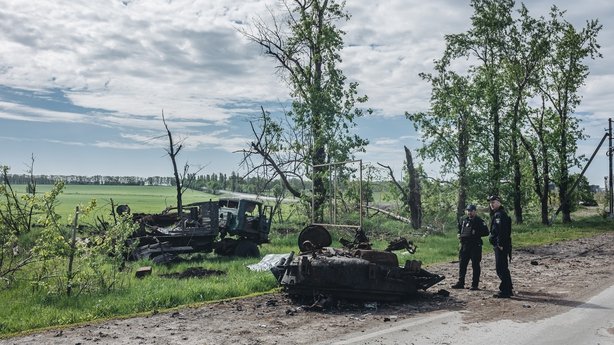 Ukrainian policemen stand at the wreckage of a tank as a destroyed military vehicle is seen behind in Kharkiv yesterday
The Kremlin calls its 24 February invasion of Ukraine a “special military operation” to demilitarise a neighbour threatening its security. It denies targeting civilians.

Ukraine says it poses no threat to Russia and that the deaths of thousands of civilians and destruction of cities and towns show that Russia is waging a war of aggression.

In the capital Kyiv, wives and relatives of Ukrainian fighters holed up in the Azovstal steel plant in the southern port of Mariupol marched and chanted for their rescue.

Russian forces have been bombarding the steelworks, the last bastion of Ukrainian defenders in a city almost completely controlled by Russia after a siege of more than two months.

“The conditions they are in are horrible,” demonstrator Alina Nesterenko said. “We are begging, we are pleading in every possible way, we are asking for our loved ones to be saved.”

Deputy Prime Minister Iryna Vereshchuk told 1+1 television that negotiations were under way for an evacuation, starting with the most badly wounded. 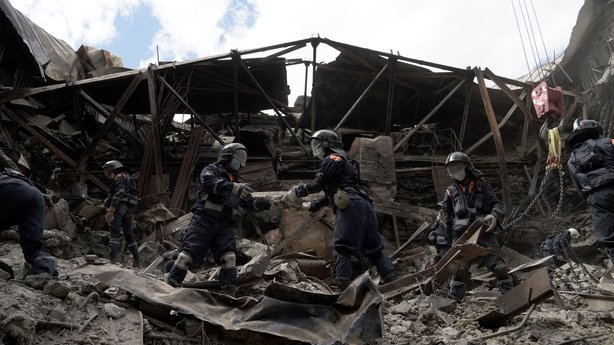 In Kyiv today, a court is due to begin hearing the first war crime case since the war began in February. A Russian soldier is due to go on trial accused of murdering a civilian in Chupakhivka, in northeastern Ukraine, on 28 February.

Renewed fighting around Snake Island in recent days may become a battle for control of the western Black Sea coast, according to some defence officials, as Russian forces struggle to make headway in Ukraine’s north and east.

Ukraine said it had damaged a Russian navy logistics ship near the island, a small but strategic outpost.

“Thanks to the actions of our naval seamen, the support vessel Vsevolod Bobrov caught fire – it is one of the newest in the Russian fleet,” said Serhiy Bratchuk, a spokesman for the Odesa regional military administration.

Reuters could not independently verify the details. Russia’s defence ministry did not immediately respond to a request for comment.

Satellite imagery provided by Maxar, a private US-based company, showed the aftermath of what it said were probable missile attacks on a Russian Serna-class landing craft near the island, close to Ukraine’s sea border with Romania.

Images also showed recent damage to buildings on the island, which became famous for the foul-mouthed defiance of its Ukrainian defenders early in the invasion. 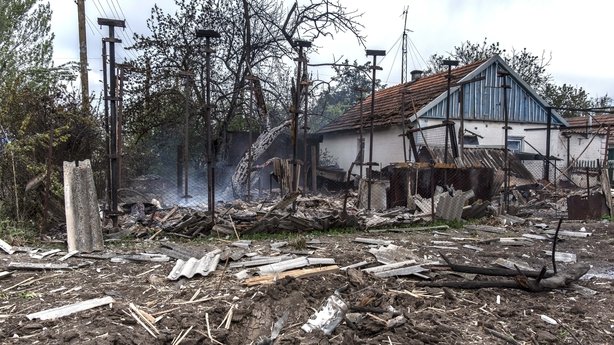 Foreign ministers from the G7 group of rich nations met to discuss a planned EU embargo on Russian oil as well as fears the conflict could spill over into Moldova.

A day after Finland committed to applying to join NATO, Swedish Foreign Minister Ann Linde said membership for her country would have a stabilising effect and benefit countries around the Baltic sea.

Joining the 30-nation Western military alliance would end the neutrality the neighbours maintained throughout the Cold War in one of the biggest shifts in European security in decades.

Their membership would also further the expansion of NATO that Putin said his invasion of Ukraine aimed to prevent.

Moscow called Finland’s announcement hostile and threatened retaliation, including unspecified “military-technical” measures, but said a newspaper report the Kremlin might cut gas supplies to Finland was mostly likely a “hoax”.

Prices for gas in Europe surged yesterday after Moscow said it would halt gas flows to Germany through the main pipeline over Poland and Kyiv said it would not reopen a pipeline route it shut this week unless it regains control of areas from pro-Russian fighters.