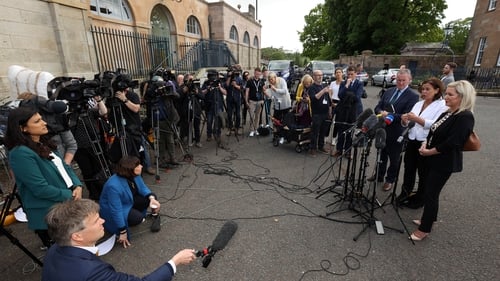 Sinn Féin and the Alliance Party have both accused the UK government of “placating” the DUP, after talks with British Prime Minister Boris Johnson in Northern Ireland.

But the leader of the Democratic Unionist Party has rubbished the idea that Mr Johnson was taking sides between the unionist and nationalist parties.

Mr Johnson is in Belfast for talks with political leaders over the formation of a new power-sharing government at Stormont, amid a stand-off over the Northern Ireland Protocol.

“The idea that the Prime Minister is taking sides is for the fairies,” the DUP’s Jeffrey Donaldson told reporters.

“The Prime Minister is here because it’s his job to protect Northern Ireland, it is his job to ensure that we have the right to trade freely within our own country.” 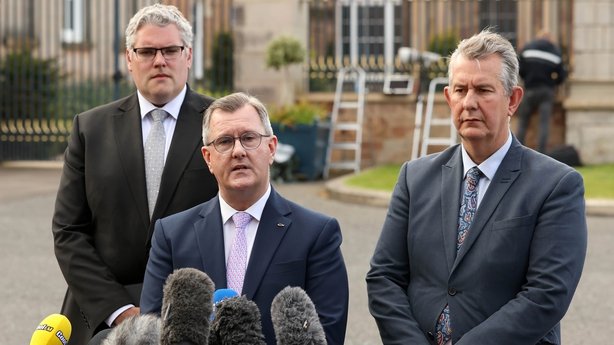 Jeffrey Donaldson said he had set out in “very clear terms” what his party expects Boris Johnson to do
He said it was time for Sinn Féin “to get real”.

Mr Donaldson said he had set out in “very clear terms” what his party expects Mr Johnson to do to tackle instability he said is being caused by the Northern Ireland Protocol.

Speaking after the meeting, he said he will suspend judgement until he sees what the UK government is proposing.

“We’ve had the words we now need to see the action,” he said.

He was asked about speculation that the British government might announce plans for new domestic legislation to tackle the protocol but not actually table it in parliament. “I don’t see much point in having legislation if you don’t enact it,” he replied.

The delegation emerged after 45 minutes of talks.

Ms McDonald said it was clear the UK government’s priority was not the re-establishment of the Stormont Executive. Rather she said it was intent on “placating” the DUP. 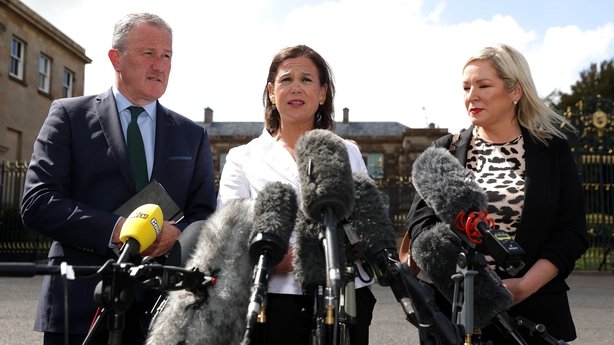 Sinn Féin’s Mary Lou McDonald speaking to media with Conor Murphy and Michelle O’Neill
She said unilateral action on the protocol would be a reckless act.

“We find ourselves now at the mercy of the DUP fully backed by the British government. It is an appalling vista,” said Ms McDonald.

“It seems to us absolutely extraordinary that the British government would propose to legislate to break the law. It’s an extraordinary proposal and one that would amplify the bad faith with which the Tory government has conducted itself from [the] beginning of the entire Brexit debacle,” Ms McDonald said.

“We have told him very clearly that we are here to do business. The people have spoken. We have had the election, the votes have been counted, the die has been cast. Michelle O’Neill is the first minister in waiting and we want to get on with things and get back to business.

“I’m sorry to report that we’ve had no straight answers really from the British Prime Minister except a confirmation of what we already knew, which is that in fact this impasse is entirely co-ordinated between themselves and the DUP, and if the DUP are acting shamefully in holding back government, well then the British government is behaving even more shamefully.” 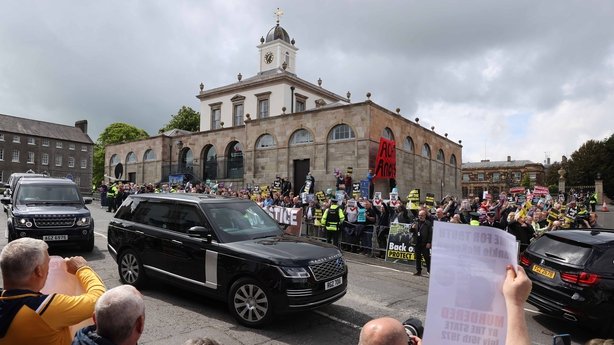 The Alliance Party said it had been a “frustrating” meeting with Mr Johnson.

The party’s Stephen Farry said it appeared the UK government was trying to placate the DUP and hardline elements within his own party.

He said trust would be critical to a resolution of the impasse and that meant honouring existing agreements.

Speaking on RTÉ’s Drivetime, Mr Farry described the meeting as “a fairly futile exercise” and said Mr Johnson “needs to stop indulging the DUP” and give the party some home truths.

He said the majority of people in Northern Ireland want the Assembly working.

The DUP has been pressing the British government to take unilateral action on the Northern Ireland Protocol, which it says undermines Northern Ireland’s constitutional position within the UK.

The Irish Government, European Union and the US administration have all warned against such a move.

Four of the five main parties – Sinn Féin, Alliance, Ulster Unionists and SDLP – have already said they believe devolution should be restored with immediate effect.

But party leader Doug Beattie said the EU’s negotiating mandate did not allow Maros Šefčovič to go that far and that needed to change.

The SDLP leader Colum Eastwood said after meeting with Boris Johnson that the issues surrounding the protocol should not distract from issues like the cost of living crisis.

“While I welcome his call for the resumption of power-sharing, the gulf between Boris Johnson’s actions over the last two years and his words today is so great that it makes it impossible to trust the Prime Minister,” said Mr Eastwood.

“He has recklessly used this place to serve his own narrow political interests and once again he is on the verge of overriding the interests of the majority of people here for his own ends.”

“This farce cannot continue,” he added.

Several hundred protesters gathered outside Hillsborough Castle near Lisburn for the talks. They included those demanding legislation to protect the Irish language.

Groups opposed to the UK government’s legacy plan were also there. That plan would see an amnesty from prosecution for those who cooperate with a truth recovery process. 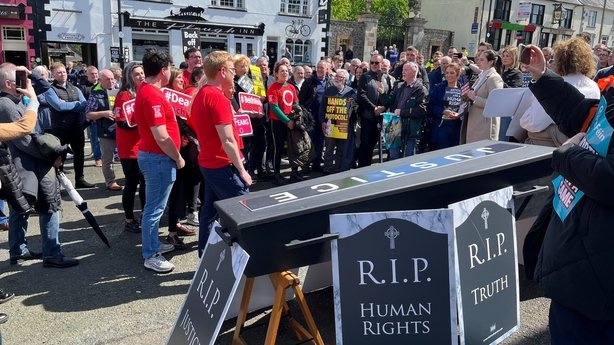 This evening, the Minister for Foreign Affairs Simon Coveney said the European Commission has been working hard on solutions that would distinguish goods going to Northern Ireland from Great Britain and staying there, compared to goods entering Northern Ireland but destined for the Republic.

Meanwhile, the Taoiseach Micheál Martin said the only way to resolve issues around the protocol was through substantive talks between the UK and the EU.

In an article for the Belfast Telegraph newspaper, the British Prime Minister sets out his position.

He again said his government will take action if necessary, but also appears to leave the door open for further negotiations, suggesting imminent unilateral action may not be on the cards.

The suggestion is “a reformed protocol”, not an abandoned one.

“We will always keep the door wide open to genuine dialogue,” he wrote.

“And we will continue to protect the single market – as it has been protected throughout the existence of the protocol so far – and the open border with the Republic of Ireland which will always be of paramount importance.

“There is without question a sensible landing spot in which everyone’s interests are protected. Our shared objective must be to the create the broadest possible cross-community support for a reformed protocol in 2024.

“I hope the EU’s position changes. If it does not, there will be a necessity to act. The government has a responsibility to provide assurance that the consumers, citizens and businesses of Northern Ireland are protected in the long-term. We will set out a more detailed assessment and next steps to Parliament in the coming days”.